In a Dark Shack Luring Pike, Spear at Ready 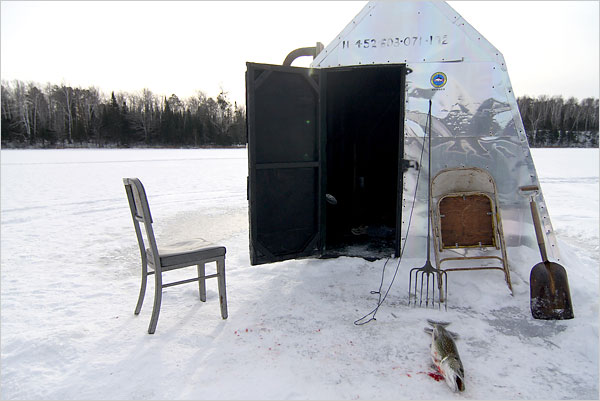 USING a folding ice saw and a chisel, Mike Holmes had carved a precise rectangle — 3 feet by 6 feet — through the ice of Lake Mary, in the rural woodlands near Crystal Falls on the Upper Peninsula of Michigan. Then he dragged his windowless “darkhouse” over the hole to block the daylight.

Inside, something magical happened. Sunlight penetrating the frozen lake lit the hole with a hypnotic glow. It was seductive and beautiful, nature’s flat-screen TV, a mesmerizing window to life and death beneath the ice.

Mr. Holmes sat on a steel chair and peered into the hole, his face bathed in soft green light. He yanked a length of fishing line tethered to a fish decoy. Carved from cedar, it was 15 inches long and painted to resemble a whitefish. With each tug, the decoy swam up and forward, circling out of sight, far beneath the ice. Moments later it would reappear, fluttering in dying spirals until it came to rest at the end of the line. There it hovered, looking just like a large, luminous baitfish. Propped next to the hole was a heavy spear, its seven steel tines ground to gleaming points.

Spearing is a primitive form of fishing. Hook-and-line anglers, guided by G.P.S., cruise to fishing holes in candy-flake-colored boats with 200-horsepower outboards, electronic fish finders, even underwater cameras. But technology hasn’t modified the equation of darkhouse spearing. “It hasn’t changed to this day,” Mr. Holmes said. “You have a spear, you have a decoy, you have a hut.” Spearing remains as it always has been, a game of deception and patience in which your attention can never waver. It is less fishing than hunting.

A retired conservation officer for the Michigan Department of Natural Resources, Mr. Holmes, who lives near Iron Mountain, which is close by, had the easy manner of someone confident in dealing with people. He wore a black wool Stormy Kromer cap, earflaps tied up even though it was 11 below (not counting the wind chill). He had parked his Ford pickup on the ice near shore, backed his four-wheeler out of the bed, loaded up spear, ice saw, ice chisel and decoys, and putt-putted to his shack in the middle of a small bay.

His shack, surrounded by featureless ice and snow, sat on a breakline, he explained, where 7 feet of water slid to 12, near a bed of robust weeds known as cabbage. Predatory northern pike, some as large as 20 pounds, will patrol the weed edge to catch a bluegill or perch that has strayed from cover.

Mr. Holmes popped open a plastic tub the size of a briefcase to reveal an array of decoys — a jointed yellow perch, a sunfish as bright as Christmas candies, several impressionistic shiners and suckers. Most impressive were several large whitefish. He clipped one to a line, cleared his fogged glasses over the toasty propane stove, then went to work. “I’ve speared my whole life,” he said. “I grew up spearing.”

Pike respond to different decoys at different times — and in various ways. Sometimes they flash through the hole, smash the decoy and disappear. Other times, they glide into view and turn to attack, or simply stop, nose to nose with the decoy. Occasionally, they materialize from nowhere. “You look down, and the fish is there,” Mr. Holmes said. “Every time out, it’s something different.”

At the sight of a fish, the fisherman reaches for the spear and eases the tines silently into the water. Before attacking, a pike contracts into a slight S-bend. That is the time to throw. Supporting the shaft with your off-hand, you launch the spear with a long shove, as if shooting pool.

The suspense can be unnerving. Even experts come unglued. Days earlier, Mr. Holmes was lifting his decoy when a giant pike — 40 inches at least — slipped into view. In his excitement, Mr. Holmes committed the “cardinal sin.” He hurled the spear down the hole, as Ahab might, startling the fish with a tremendous splash. “And I missed it,” he said. “You wouldn’t believe how fast they are.”

Mr. Holmes’s biggest pike measured 43 inches and weighed 23 pounds. The silhouette of its head in the hole looked like a shovel. The spear hit and penetrated perfectly. “I was just screaming,” he recalled. He dialed a friend on his cellphone. As Mr. Holmes whooped incoherently, service cut out. When they reconnected, his friend shouted: “Are you O.K.? I thought you went through the ice!”

Spearing is an ancient sport. Inuit carved decoys from walrus ivory 1,000 years ago. In 1763, Alexander Henry, a fur trader, described Ojibwa Indians near Fort Mackinac (at the northern tip of the Michigan mitten) jigging decoys beneath the ice to lure lake trout.

Spearing game fish through the ice remains legal in Alaska and six states in the Great Lakes and Northern Plains. Pike are the usual quarry, but depending on state regulations, spearers may target perch, whitefish or even muskies. On Lake Winnebago and several of its tributaries in Wisconsin, fishermen spear lake sturgeon, some weighing more than 100 pounds.

“It’s a regional thing,” said Mr. Holmes, who is president of the Michigan Darkhouse Angling Association. “It has to do with heritage.” In Michigan, he insisted, the sport is as popular as ever. But in Minnesota, where a special license makes it possible to track the number of spearers, their number has dropped two-thirds in the last half-century, to about 15,000. Spearing has come under fire from catch-and-release angling groups that contend, with some evidence from Minnesota creel surveys, that spearers take bigger pike than anglers do. But spearers are so few, Mr. Holmes said, biologists have assured him that spearing has no effect on summertime fishing.

Through the morning Mr. Holmes rotated through his selection of decoys. He traded the 15-inch whitefish for a foot-long articulated perch that swam with a lifelike shimmy. “It scares the heck out of you when — whooom — something comes in and grabs it,” said Mr. Holmes, who learned to fashion decoys from his father and grandfather. Trophy cases on his walls brim with colorful wooden fish, his and others’, and his work has won awards for the realism he brings to a block of cedar.

Each decoy has its unique action. And its own story. Mr. Holmes clipped on a small “sidewinder.” It twisted on the lift in imitation of a crippled shiner. It was carved by his friend Doug Davis, who died last June. “Cancer,” he said. “It was terrible. It’s my favorite decoy. I was going to put it on the shelf. His wife, Renée, said: ‘I really wish you wouldn’t. I know Doug would want you to use it.’ So I’m going to use it one more year.”

Throughout that frigid morning on Lake Mary, fish came and went. A largemouth bass, fully three pounds, cruised by without stopping. A pike, smaller than the 24-inch minimum, swam into view, rested near the bottom for several minutes, then left. “I’ve had them lie there for hours, ” Mr. Holmes said. On three occasions, much larger pike flashed past leaving him no chance to grab his spear. Like a movie screen, the ice hole was an absorbing portal to a dramatic narrative.

“There’s always something happening on the bottom,” Mr. Holmes said. Spearing is great with kids, he said, because they love to swim the decoy. It gives husbands and wives a chance to talk — or not, but simply to gaze into this secret world and watch the decoy fall in ever-diminishing spirals.

Mr. Holmes changed back to his whitefish. With each tug it swam beneath the ice only to glide into view several seconds later. “I like a slow decoy,” he said. Suddenly a shadow sprinted toward the decoy. In a seamless act as quick as a wing shot on grouse, Mr. Holmes reached for the spear, slipped the tines into the water, and let fly with a smooth shove. The shaft plunged to the bottom and trembled with the struggle of the wounded fish. Mr. Holmes pulled spear and pike to the surface on a leash of parachute cord. The shot was perfect: clean through the base of the head. Mr. Holmes pushed open the door, hoisted the pike onto the ice, and whacked it with a club of bird’s-eye maple. Thirty-one inches, bigger than one killed earlier that morning.

“That’s the limit,” he said. He packed up the two pike, spear and decoys, and shoveled clean snow over the blood-spattered ice to hide the evidence of his success from fishermen who might auger holes and fish nearby. “I don’t care how many times I go in there,” he said, “it’s just so neat.”

Correction: February 6, 2009An article last Friday about spear fishing in Michigan misstated the number of states where spearing game fish through the ice is legal. It is legal in seven states, not six. (Besides Michigan, Wisconsin, Minnesota, North Dakota, South Dakota and Montana, Alaska also permits spearing game fish.)